While I was living in Jakarta from 1987 to 1992, I was the luckiest person in the world.  Why?  Because I got to eat Ibu Sophia’s cooking every day.  I ate like a king – and many guests did as well.  During those years, I traveled all around the country and ate in food stalls, cheap restaurants, fancy restaurants, and many homes.    She was the best cook in Indonesia, hands down. 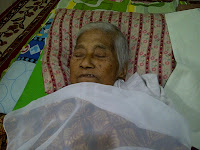 But she not only fed me.  Even though I was in my late 20s and early 30s, she looked after me like a mother.  Born in the Semarang area, probably in the 1930s, she had little formal schooling, but nonetheless had great curiosity about the world.
She loved having guests and finding out what they did.

One night, we had General Olusegun Obesandjo, the former (elected) President of Nigeria, to dinner.   He was majestic in bearing and arrived in very colorful robes.  He ate a huge amount, and then he went into the kitchen.  I peeked in through the door. Though he could not speak her language he spent several minutes with Ibu Sophia, complimenting her cooking and even flirting.  When I asked her about it the next morning, she blushed deeply and said, "Where is he from?  What does he do?  He is a very interesting man."

How grateful I am to have known – and been cared for – by Ibu Sophia.  She died last month, peacefully, surrounded by her family.  I will miss her.