Many people have asked me about my last post. So let me allow Robert to elaborate here via video, because it is a *very* good deal.

If you have a favorite project on GlobalGiving, now is the time to act. With relatively modest effort, you can dramatically increase the chance the project may be awarded an additional $50,000.

This is the democratization of philanthropy at work. The Case Foundation and Parade Magazine are putting up $50,000 for each of the four projects on GlobalGiving that attract the most donors through a single fundraiser.

That's right - the highest number of donors, not the largest amount of donations. Minimum donation size is $10.

Go here to get started.

Online Giving Challenge with $500,000 in prizes

The old thinking goes that to change the world, you have to give millions. But young tech-savvy philanthropists are trying to prove otherwise.

Leveraging new technologies and the growth of social networking Web sites, several online-giving pioneers have been trying to expand the pool of potential donors by democratizing philanthropy and making it more transparent.

"This is pretty revolutionary, that technology allows us to do this," Whittle said. "It used to be that if you wanted to give and have an impact, people thought you had to be Bill Gates or Oprah Winfrey. But because of the way the technology works, you can be an 'ordinary Oprah.' If you've got $10 or $100 or $1,000, you can come and find a school in Africa to support, and you can get updates from the field to get responses to your support.

This is from a very nice article by Philip Rucker in today's Washington Post talking about how the Case Foundation is working with GlobalGiving, Network For Good, and Parade Magazine to encourage online giving. Parade Magazine has 70 million readers!

The Case Foundation is providing $500,000 to the causes that attract the most donors - not necessarily the ones that raise the most money. This makes this a real exercise in the democratization of philanthropy.

Tyler Cowan is a rare combination of a good academic and a savvy self marketer. His blog is one of the most widely read in the world. One reason for this is that the content is good. But what separates Cowan from many others is that he reassures his readers early and often that he is an authority by prominently citing what others say about him.

Today, he quotes Arnold Kling's most recent compilation of the best economics books of 2007:

Two books that show economic intellect to advantage are Discover Your Inner Economist, by Tyler Cowen and One Economics, Many Recipes, by Dani Rodrik. Cowen's book is a set of observations on everyday life, while Rodrik's book looks at the high-level issue of which economic institutions to recommend for underdeveloped countries. I made the case for Cowen's book here and the case for Rodrik's book here.

Note that in this quote, he is careful not to single himself out to make himself seem to self-aggrandizing. Instead, he adds Dani Rodrik into the mix. This serves the additional function of signalling to the reader that he is in the same league with Dani Rodrik, someone who (at least until recently) was much more widely known and respected.

Flavor of the day? Not. 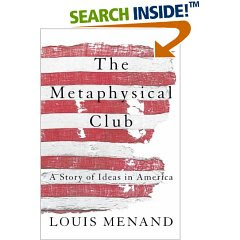 I finished The Metaphysical Club by Louis Menand last night. It is sort of an intellectual history of the United States, covering the period right before the Civil War until about World War I. The main stars include Oliver Wendall Holmes, William James, Charles Pierce, and John Dewey. These guys were discussing many things that we assume are "new" today - the wisdom of crowds, complex adaptive systems, and the nature of uncertainty.

But their main collective contribution was the rejection of the idea of firm dogmas in favor of pragmatism. Their common realization of this was forged by their varied life experiences during an extraordinary period of US history. (Holmes was wounded several times in the Civil War but went back to the front each time to face horrifying conditions; meanwhile, James had no stomach for fighting and stayed home on the couch.)

In the words of a citizen reviewer on Amazon:

They realized that hewing to rigid principles and old certitudes was futile, even dangerous. Together, they created pragmatism, in which keeping the public debate and political process open to dissenting views trumps any underlying theoretical framework, which, after all, might be proven wrong by the next round of scientific research.

Many of us are drawn to rigid principles and sweeping theoretical frameworks, because in the short term they make life easier to understand and navigate. But Holmes, James, et al realized that the world is too complex to be described -- much less navigated or molded -- by any such certainties.

We should all keep this in mind next time we are seduced by the latest book or idea. And students starting a graduate program in any field would be especially well advised to read this book. It will help them avoid falling under the spell of that charismatic advisor or theorist whose world view is so compelling...

GlobalGiving is featured as a "Rising Star" in this month's FastCompany Magazine.