On May 19, Bill Easterly and Laura Freschi announced that their blog Aid Watch was ending, after running about two years. I was shocked, and (after checking my calendar to make sure it was not April 1), dismayed.

Aid Watch was controversial from the start.  Bill and Laura did not hesitate to take on sensitive issues, and they did not cloak their criticisms in vague bureaucratic language.  Typical evaluations of aid programs are dense and oblique, with shortcomings buried under mounds of data and jargon.  After a couple hundred pages of analysis touting the benefits of a program, official evaluations often tip their hat to failure with a paragraph beginning "But challenges remain..."  And then phase two of the same program begins with only a modest modification to a fundamentally failed design.

Aid Watch specialized in cutting through all of the obfuscation to say bluntly "This does not work.  We should stop it now and do something else if we really care about helping the poor."

In their valedictory post, Bill and Laura promise that the work of Aid Watch will continue, with longer and more in-depth pieces under the guise of Aid Watch's parent - the Development Research Institute (DRI), at New York University, where Bill is Professor of Economics.  I, for one, am very much looking forward to the next chapter of Aid Watch.
Posted by Dennis Whittle at 11:03 AM | Permalink 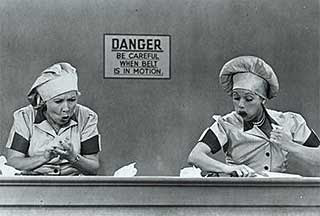 Those are just some of the findings reported in Dave Ulrich and Wendy Ulrich's book The Why of Work.  The authors argue that companies that treat people as just another factor of production are increasingly at a competitive disadvantage.  Conversely, companies that engage their employees in a meaningful way have higher market returns.
Why?  The authors offer the following possible explanations:
There are many approaches to creating a meaningful work environment.  One of the simplest (if still rare) is just to treat employees like real people, with valuable insights and instincts for what is best for the business.  Another is for the company to engage with the broader communities where it does business, by providing mentoring and volunteering and/or by financially supporting schools, clinics, and other social initiatives.  In other words, by treating the broader community members as real people.
What if all businesses treated their employees and customers this way?
Posted by Dennis Whittle at 9:23 AM | Permalink

This idea of allowing several ideas to develop in parallel runs counter to our instincts: We naturally tend to ask, "What is the best option?" and concentrate on that. But given that life is so unpredictable, what seemed initially like an inferior option may turn out to be exactly what we need. It's sensible in many areas of life to leave room for exploring parallel possibilities—if you want to make friends, join several social clubs, not just the one that appears most promising—but it is particularly true in the area of innovation, where a single good idea or new technology can be so valuable. In an uncertain world, we need more than just Plan A; and that means finding safe havens for Plans B, C, D, and beyond.

That is from an excerpt in Slate from Tim Harford's new book Adapt: Why Success Always Starts With Failure.

Tim notes how breakthrough ideas often come from outside the mainstream.  The famed British Spitfire plane is credited by many with having prevented defeat by Germany in WWII.  Yet the plane almost never came to be.  Not only was the inventor unconventional, but so was the source of funding at a time when the project was nearly cancelled:


Rescue came from the most unlikely character: Dame Fanny Houston, born in humble circumstances, had become the richest woman in the country after marrying a shipping millionaire and inheriting his fortune. Lady Houston's eclectic philanthropy knew few bounds: She supported oppressed Christians in Russia, coalminers, and the women's rights movement. And in 1931 she wrote a check to Supermarine that covered the entire development costs of the Spitfire's predecessor, the S6. Lady Houston was furious at the government's lack of support: "My blood boiled in indignation, for I know that every true Briton would rather sell his last shirt than admit that England could not afford to defend herself against all-comers." The S6 flew at an astonishing speed of 407.5 mph less than three decades after the Wright Brothers launched the Wright Flyer. England's pride was intact, and so was the Spitfire project. No wonder the historian A.J.P. Taylor later remarked that "the Battle of Britain was won by Chamberlain, or perhaps by Lady Houston."

(Note that given her range of interests, no one would have accused Dame Houston of practicing 'strategic philanthropy!')

Hat tip for this excerpt to Michael Woolcock of the World Bank and Harvard.  His own recent blog makes excellent related points concerning aid initiatives. I have been heavily influenced in my own thinking by discussions with Michael over the years.
Posted by Dennis Whittle at 9:56 PM | Permalink

Fatal error: Unable to open file
That was the response when I clicked on the Email Us link at the US Postal Service website this morning.  Earlier, I had stood in a long line at our neighborhood post office while the one postal clerk on duty valiantly tried to process all the customers.  While waiting, I looked around and noted once that the run-down facility looks like something from the Soviet Union in the late 1980s.  (At least in the Soviet Union, there were more clerks on duty, even if they were not always friendly.)

The clerk in our neighborhood station has always been nice to me.  She labors under horrendous conditions, but if I smile and am nice to her, she always reciprocates.  Though the lines are predictably very long at the station during certain periods, and USPS never provides more clerks to assist, I try never to complain to the lone woman on duty, because I know she has no power to change things.

While standing in line this time, I decided I would give some feedback to the US Postal Service itself.  I looked around at the walls in vain for a sign saying "Questions? Comments?  Call us at xxx or email us at yyy."  Then I realized I have a USPS app on my iPhone.  Great! I thought, and fired it up.  Alas, the app provided lots of information about zipcodes and rates but no way to give feedback.   Darn, but at least they would have a twitter account, I figured, and ran a search on my phone.  Someone had in fact claimed the @usps name, but had made no tweets and followed zero people.

So I gave up and was finally waited on by the nice lady, who was relieved my particular parcel was easy to process.  Then I went home, and sat down at my computer and thought I would give USPS one last try.  Success!  There it was on USPS.com - a link saying Questions? Comments?  Click here to email us.  I mentally apologized to USPS before clicking, and then my screen went blank and said: "Fatal error: Unable to open file."

How many agencies or companies do you know that make it nearly impossible for users to give feedback?  They are usually the ones whose leaders say "We hear loud and clear from our customers that..."  But the truth is that they don't hear loud and clear at all.  They only hear sporadically and indirectly, through surveys and analyzing data.

What if each supervisor at USPS had a dashboard that had real-time feedback from customers from email, twitter, text message, and the USPS website?  And what if the supervisor's boss could see that feedback in real time?  And what if, maybe even more important, the public could see the same feedback in real time?  How would that change incentives and behavior?


My own guess is that my neighborhood post office would be a lot cleaner, there would be plenty of clerks during peak periods, and they would rarely run out of supplies.

(Extra credit:  Which company or agency do *you* think would benefit most from such a dashboard?)
Posted by Dennis Whittle at 11:50 AM | Permalink

The following is cross-posted from AidWatch.


An eloquent 3 year-old would have been better asking "What the dickens are you talking about? Who is defining success? Who says failure is bad, anyway?" - Joe

Earlier I blogged about aid cheerleaders and critics. Each camp argues about the mean outcome of aid rather than the distribution of impact among projects. Both camps agree that some projects have positive results and others negative. So why not try to figure out which projects work and focus our resources on them?

I got some great and insightful comments and a few nice aid distribution graphs from readers. Here are some key themes:

Petr Jansky sent a paper he is working on with colleagues at Oxford about cocoa farmers in Ghana. The local trade association was upset that they could not get pervasive adoption of a new package of fertilizer and other inputs designed to increase yields. According to their models, the benefits to farmers should be very high. The study found that - on average - that was true, but that the package of inputs has negative returns to farmers with certain types of soil or other constraints. Farmers with zero or negative returns were simply opting out.

At first glance, these findings seem obvious and trivial. But they are profound, in at least two ways. First, retention rates are an implicit and easily observable proxy for net returns to farmers. We don't need expensive outside evaluations to tell us whether the overall project is working or not. And second, permitting farmers to decide acknowledges differential impacts on different people even within a single project.

What other ways could we design aid projects to allow the beneficiaries themselves to evaluate the impact and opt in or out depending on the impact for them personally? And how would it change the life of aid workers if their projects were evaluated not by outside experts and formal analyses but by beneficiaries themselves speaking through the proxy of adoption?
Posted by Dennis Whittle at 9:45 PM | Permalink